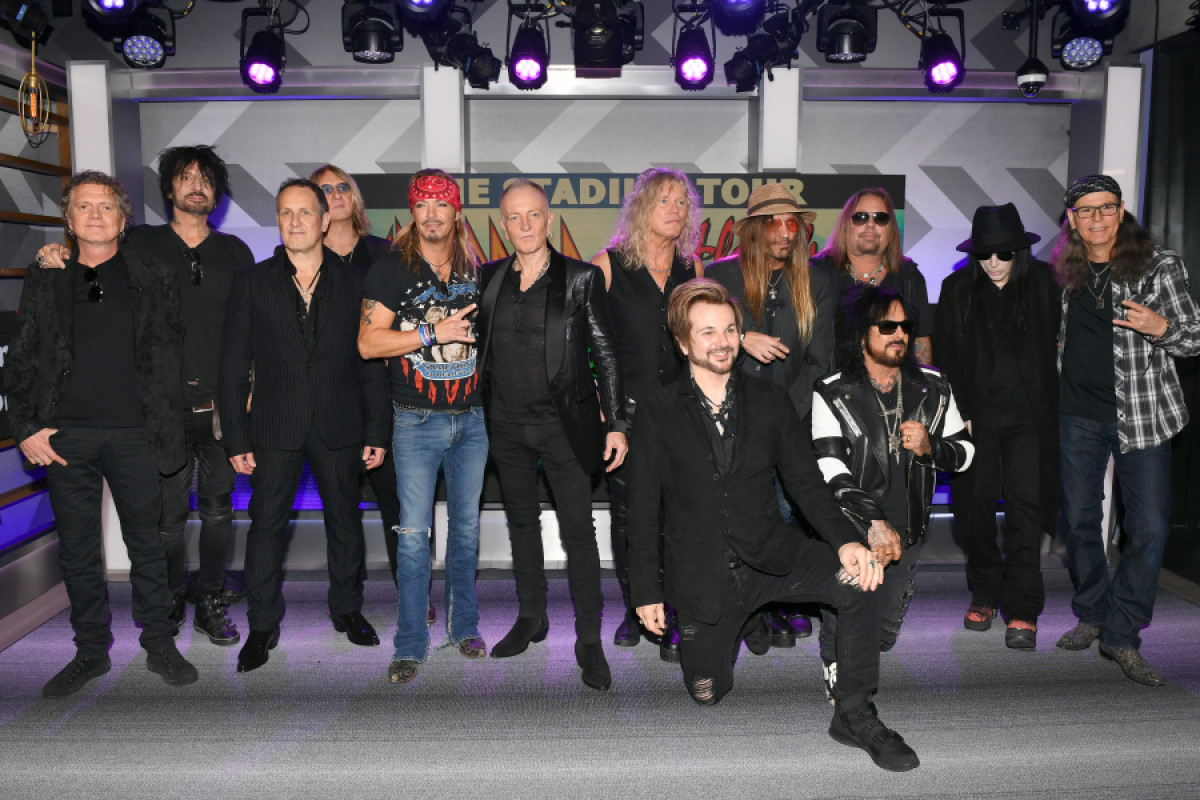 The full lineups of Def Leppard, Mötley Crüe and Poison — all 13 members ­ — were assembled in a small room at SiriusXM’s Los Angeles headquarters for the official announcement of The Stadium Tour on Wednesday. The 22-date trek in the summer of 2020 will unite the three titans of glam-metal’s circa-1987 peak along with fellow travelers in riffs, Joan Jett and the Blackhearts.

Fellow MTV-era icon Slim Jim Phantom of the Stray Cats peppered the artists with questions and assembled members of the press snapped cameras. Beyond the anticipation for the rumored trek, many headlines have focused on the re-emergence of Mötley Crüe, who supposedly signed a “cessation of touring agreement” that kept them from reuniting after their Final Tour ended in 2015.

“Hey, can I step in a second?” Poison bassist Bobby Dall interrupted when Mötley Crüe were asked about it. “Contracts are meant to be broken.”

“And, plus you know we like to blow shit up,” Crüe drummer Tommy Lee interjected.

“Honestly, I don’t think any of us thought, when we were on the final tour, we would ever get back together,” Crüe bassist Nikki Sixx said earlier in the afternoon. “We weren’t really getting along at that point. We had been together 35 years and it’s been a lot of years on the road. I don’t think we took a lot of time for ourselves off. We were just constantly touring for all that time. And when we came to the end, we broke the band up and everybody went their own ways. I think we really needed that break.

However, no one in that room seemed more excited about the tour than Poison frontman Bret Michaels. Michaels pumped his fist when Def Leppard’s Rock and Roll Hall of Fame induction was mentioned and fanboyed over the idea of new Lep material. At the end, he started personally moving chairs so everyone could get a photo together. “Bret was saying to me a little while ago,” Sixx said, “[if] he wasn’t on the bill, he’d be going to the show.”

“I’m just telling you that it is going to be not just ‘The Stadium Tour,’ it is the party of the summer,” Michaels said.

“If [the other bands] cut half their set, there’s still nothing but hits,” Michaels said.

Visibly absent from the conference was tour opener Joan Jett, whose name was repeatedly mentioned by the assembled artists, making it very clear that she’s an important, if not equal, part of this journey.

“You just put those four names on a piece of paper and look at ’em, whichever way ’round they look at it, it’s a big statement really,” Def Leppard leader Joe Elliott said. “And you know, the Eighties get mocked a lot. There is a lot of people that still think of the Eighties as a mockable decade, and we’re about to prove that it’s not. It’s last man standing to a point, maybe, but we have survived… You can sit and analyze it all you like, but at the end of the day, if the songs are still getting played on the radio, there’s a reason for that. It’s because they were good songs.”

And don’t think, like Crüe’s contract, that these tour dates are the final word. “There’s 22 stadium shows, so it’s pretty much most major territories. And in fairness it seems to be growing and there’s more interest before it’s even gone on sale,” Elliott said. “So it may extend one way or another, even in the next year.”