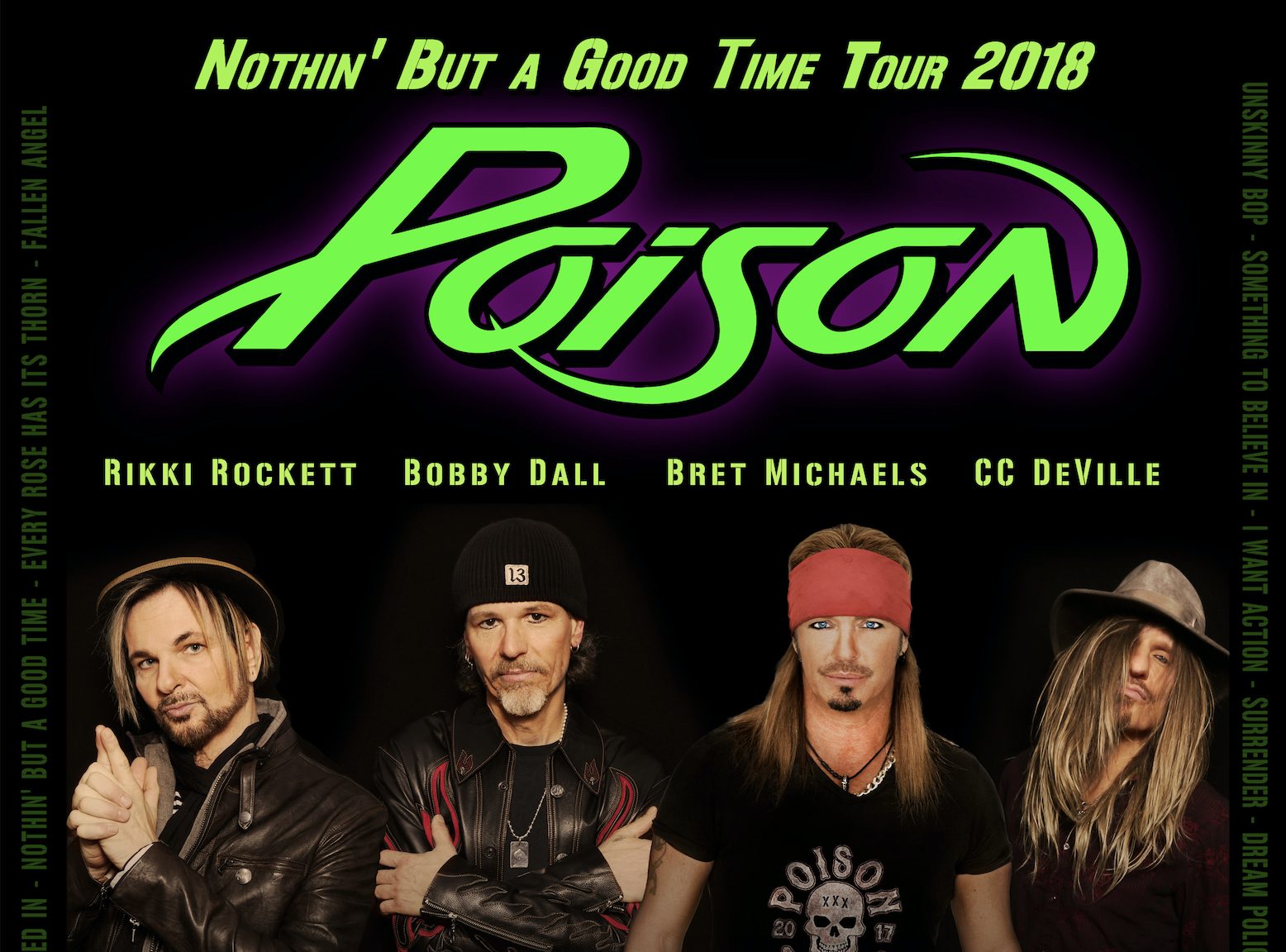 Music fans wanting a little variety with their summer tour package will get that very thing with the “Poison…Nothin’ But A Good Time 2018” tour. Iconic rock band POISON, with all original members, will be joined by CHEAP TRICK and POP EVIL on its trek across the U.S. this summer. The tour is set to launch May 18 in Irvine, CA at Five Points Amphitheatre.

Produced by Live Nation, tickets for various cities will go on sale starting Friday, February 9 and Saturday, February 10. Each band will be offering their own exclusive VIP packages and meet & greet opportunities beginning February 6 at 12pm local time. POISON will be offering direct-to-fan access to the best seats in the house via their own exclusive pre-sales at PoisonOfficial.com for access to exclusive content, ticket pre-sales and VIP packages. VIP Packages for CHEAP TRICK will be available for all dates, details for which can be found at www.CheapTrick.com. POP EVIL will also be offering VIP meet & greets at PopEvilVIP.com. For more information about the “Nothin’ But A Good Time 2018” tour, please visit Livenation.com.

The bands are fired up to make the journey across the U.S. together. Bret Michaels, POISON lead singer and noted philanthropist says, “The all original POISON is headlining again this summer. It’s going to be a mega concert and party combined. We will be playing all the hits and bringing high energy rock and roll good times. I promise this will be awesome. My friends CHEAP TRICK and POP EVIL will be joining us as well as some special guests on select dates. Again, I know all the bands with all the hits will be giving 1000%!!! Over the last years, POISON has got to co-headline with some great bands:  Def Leppard, Motley Crue, Kiss, Lynyrd Skynyrd, to name a few, but I promise again, C.C., Bobby, Rikki and myself together will bring NOTHING BUT A GOOD TIME!!!”

“POISON is a just great American Rock and Roll Band,” declares Bob Roux, President of U.S. Concerts, Live Nation. “Along with CHEAP TRICK, this show is going to be Nothing But A Good Time –  The Full Tilt Party of the Summer. POISON and CHEAP TRICK always deliver the goods.”

While POP EVIL singer Leigh Kakaty concludes, “This summer is going to be an exciting one for POP EVIL, that’s for sure! What a fantastic opportunity to bring our live show across the country on the big stage with such legends like POISON and CHEAP TRICK.”

POISON, fronted by reality TV superstar Bret Michaels (lead vocals/guitar), Bobby Dall (bass), Rikki Rockett (drums), CC DeVille (guitars) is known around the world for their high energy, big hits, live show and is one of America’s legendary Rock bands. They have sold over 40 million albums and DVDs worldwide and have sold over 15 million records in the United States alone. POISON, whose career has spanned over 25 years, may be one of the most successful independent bands to have such a long multi-Platinum career. Proof that their have fun, but get it done attitude does just that. They’ve released seven studio albums, four live albums, five compilation albums, and have issued 28 singles to radio. They’ve charted 12 singles to the Top 40 of the Billboard “Hot 100,” including six Top 10 singles "Nothin’ But A Good Time," "Talk Dirty To Me," "Unskinny Bop," and "Something To Believe In,” as well as the #1 smash hit, "Every Rose Has Its Thorn.” Their breakthrough debut album, the multi-Platinum LOOK WHAT THE CAT DRAGGED IN, was released in 1986 and they hit their peak with the second album, OPEN UP AND SAY... AHH!, which became the band's most successful album, being certified five times Platinum in the U.S. The popularity continued into the new decade with their third consecutive multi-Platinum selling album, FLESH & BLOOD. In the 1990s following the release of the band's first live album, SWALLOW THIS LIVE, the band experienced some lineup changes, but despite that, the band's fourth studio album, NATIVE TONGUE, still achieved Gold status and the band's first compilation album, POISON'S GREATEST HITS: 1986–1996, went double Platinum. In the 2000s, with the original lineup back together, the band found new popularity after a successful greatest hits reunion tour in 1999.The band celebrated their 20-year anniversary with “The Best of Poison: 20 Years of Rock” tour and album, which was certified Gold and marked POISON's return to the Billboard Top 20 charts for the first time since 1993. Throughout the years, Bret Michaels has released several chart topping solo albums and starred in some of the highest rated, record breaking reality TV shows on NBC, ABC and VH1. A philanthropist, the type 1 diabetic, Michaels has donated a portion of the proceeds from his latest single, “Jorja Bleu,” to St. Jude Children’s Hospital and through is Life Rocks Foundation supports many other charitable causes. After more than 30 years, the band is still recording music and performing live to audiences around the world.

CHEAP TRICK: Robin Zander (vocals, rhythm guitar), Rick Nielsen (lead guitar) and Tom Petersson (bass guitar) are part of the very fiber of American music, inspiring and delighting generations with their unique union of massive melodies and razorblade riffs, their own special brand of mischievous wit and maximum rock ‘n’ roll. Since the ‘70s, they’ve been blending elements of pop, punk and even metal in a way that is instantly catchy and recognizable. With timeless classics such as “I Want You to Want Me” and “Surrender,” CHEAP TRICK, now with drummer Daxx Nielsen, are a musical institution. The Rockford, IL band is as vital today as ever, having released three records in the last three years -- BANG ZOOM CRAZY...HELLO (2016), WE’RE ALL ALRIGHT (2017) and CHRISTMAS CHRISTMAS (2017) –and toured relentlessly to packed audiences around the world. 2016 saw CHEAP TRICK's long-awaited induction into the Rock and Roll Hall of Fame. The induction honored both the band and the pioneering sound that has earned them total record sales well in excess of 20 million featured appearances and more than 40 international Gold and Platinum certifications. 2017’s WE'RE ALL ALRIGHT! was yet another undisputed triumph for the band as the album's first single, "Long Time Coming," enjoyed an unprecedented run of 18 weeks at #1 on the Mediabase Classic Rock chart.

POP EVIL:  Leigh Kakaty (vocals), Dave Grahs (rhythm guitar, backing vocals), Nick Fuelling (lead guitar, backing vocals), Matt DiRito (bass, backing vocals), Hayley Cramer (drums)—will release their fifth self-titled album February 16 on Entertainment One. Produced by Kato Khandwala, POP EVIL captures Kakaty and his bandmates at their most inspiring. Every song on the album offers a different spin on the concept behind the band’s name and in an era when many rock bands create a few strong singles, and six or seven less memorable songs and call it an album. POP EVIL is all killer, no filler – the best 11 songs culled from 30 demos. It’s a surging, contemporary sounding release that incorporates metal, alternative, hard rock and even some electronic music. In the wake of the band’s peppy, upbeat 2015 album UP, which debuted #1 on the Independent Artist Billboard Album Chart, it went on to produce their biggest single to date, “Footsteps.” It’s a wake-up call, a musical rebirth that inspired the band to self-title the release, partially since they’d never done so. ONYX the bands best-selling album to date was POP EVIL’s breakthrough album that features three straight #1 Rock Singles, “Trenches”, “Deal with the Devil” and “Torn To Pieces.” Their first album, LIPSTICK ON THE MIRROR, came out in 2008 (leading to iTunes naming them "Top New Artists of '08"), and while it introduced listeners to the band’s core sound with well-received singles like “Hero” and “100 in a 55,” POP EVIL has grown exponentially since then.

Check out the “Poison…Nothin’ But A Good Time 2018” tour at any of the following stops.

* POISON, CHEAP TRICK, to be announced