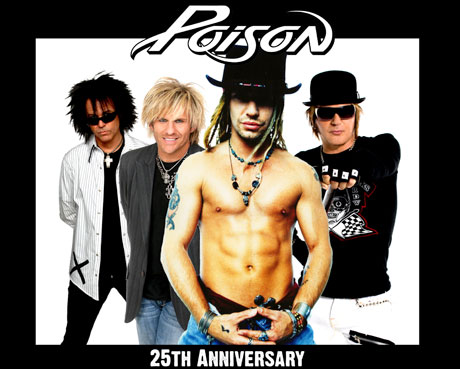 Hollywood, California - March 15, 2011 - To celebrate Poison's 25th Anniversary, 35 of the multi-platinum band's top hits and fan favorites have been gathered for Double Dose Of Poison: Ultimate Hits, a new career-spanning 2CD and digital collection to be released May 3 by Capitol/EMI. This summer, Poison will hit the road with Mötley Crüe and the New York Dolls for an extensive North American tour.

Double Dose Of Poison: Ultimate Hits features all of the band's charting singles, including the #1 smash ballad "Every Rose Has Its Thorn," Top 10 hits "Nothin' But A Good Time," "Unskinny Bop," and "Something To Believe In," and other big hits and fan favorites, including "Talk Dirty To Me," "I Want Action," "Your Mama Don't Dance," "Fallen Angel," "Ride The Wind," and many more, including standouts from the band's most recent album, 2007's Poison'd!.

"Between Double Dose Of Poison and the 25th Anniversary Tour, I honestly can't think of a better way to mark this major milestone," says Poison's singer Bret Michaels. "I'm so excited to get back out on the road with the band again to celebrate — and 'Double Dose' is going to be such a must-have collection: All the hits in one place. This is going to be really special for all of the fans - and especially for all of those who have been with us since Day One."

Poison's highly-anticipated tour with Mötley Crüe and the New York Dolls kicks off June 7 at Dallas' Gexa Energy Pavilion, before continuing on to more than 30 other cities and major venues across North America, including Los Angeles' Hollywood Bowl on June 14, Toronto's Molson Amphitheatre on June 28, Detroit's DTE Energy Music Center on June 29, and Chicago's FMB Amphitheatre on July 1.

Bret Michaels has partnered with Dean Guitars to represent a line of guitars, and he will soon release a new vocal warm-up CD. This fall, he'll hit the high seas aboard the Bret Michaels Super Cruise. Check www.bretmichaels.com for updates.