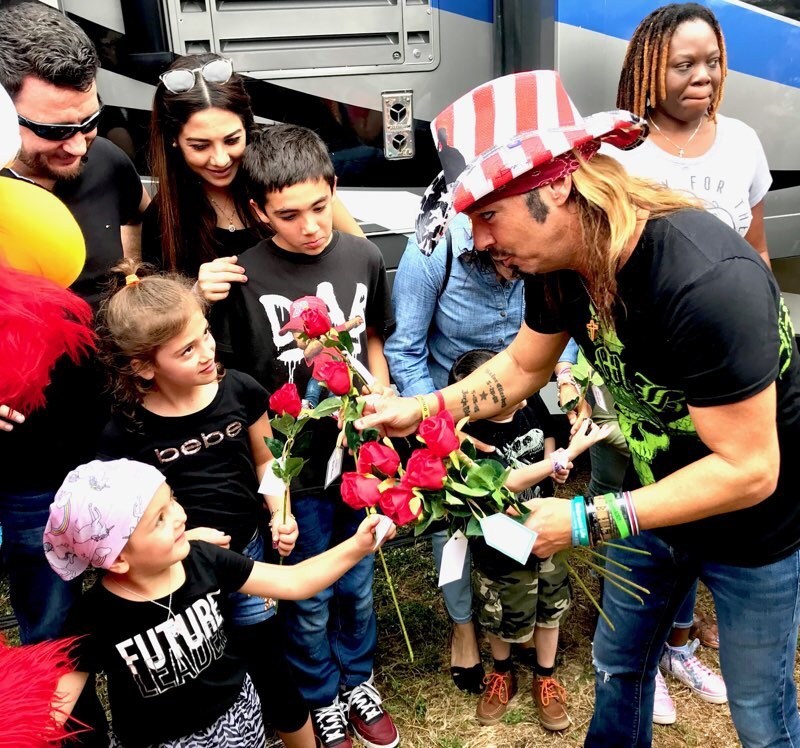 Los Angeles, CA—November 27, 2019—In addition to receiving the Humanitarian of the Year award at the 88th Annual Hollywood Christmas Parade, Bret Michaels will be performing two of his hit songs.

The global music superstar and longtime philanthropist will also be making a special Christmas relief trip to give back to the people of the Bahamas and Puerto Rico shortly after. Michaels will discuss the Hollywood Christmas Parade and upcoming relief trips on Good Day LA today.

“Michaels’ relentless effort to give back is why we chose to recognize him for this year’s award. He is continuously looking for opportunities to help others, so in the aftermath of Hurricane Dorian in September, he knew he needed to do something to help,” commented Sharratt MacEachern, the co-executive producer of the Hollywood Christmas Parade.  “At his own expense, Michaels will take his own plane to drop-off much needed supplies and toys to people of the Bahamas and Puerto Rico—many of who are still badly hurting in the wake of Hurricane Dorian and Hurricane Maria’s devastation.  This giving spirit is another example of why the Hollywood Christmas Parade recognized Michaels with the Humanitarian of the Year award.”

Michaels is currently on his Unbroken World Tour and will play a very special appearance for the Humanitarian Award, being asked to perform a two of his biggest hit songs at this year’s parade. The performance will be completely live and will bring the positive energy and gratitude that the musician’s shows are known for. Summer 2020 will bring more shows throughout the country for his solo band and the iconic singer is also working hard to bring a tour together of his original bandmates from Poison for a new tour of arenas, amphitheaters and stadiums.

About The Bahamas & Puerto Rico Drop Off:
Currently traveling on his 2019 Unbroken World Tour, Michaels will take the stage at Hard Rock Live in the Seminole Hard Rock in Hollywood, FL on December 13. The following day, he will perform at the Seminole Hard Rock’s Winterfest Boat Parade, where he will also serve as the parade’s Grand Marshal. He will then headline the Hard Rock Hotel & Casino Punta Cana in the Dominican Republic on December 21. He arranged these shows specifically so that he could make the much-needed trip to the Bahamas. He is working with the local authorities in the Bahamas to organize his donations and is also currently putting together the relief trip to Puerto Rico.

About Bret Michaels:
Bret Michaels is a multi-platinum global music superstar whose multi-faceted brand encompasses record-breaking touring sales, TV stardom and chart-topping songs. A successful entrepreneur in addition to his musical achievements, he created the multi-million dollar selling Pets Rock Collection with PetSmart, launched his own line of custom guitars and created “Bret’s Blend, Diet Trop-A-Rocka” which is a number-one-selling beverage for Dr. Pepper/Snapple Group.

Michaels, a lifelong diabetic, the son of a veteran, and survivor of a life-threatening brain hemorrhage has always stood up to any challenge that was thrown at him. As a type 1 juvenile diabetic since the age of 6, he consistently leads the charge for diabetes awareness. He developed one of the first diabetic youth camps to help children with the life-threatening disease and teach them how to manage it into adulthood. Michaels also recently supported in-person the California bill SB138 which aims to bring diabetes education to the state’s schools. Through his Life Rocks Foundation, he has raised millions of dollars for charity and he has additionally personally donated to causes throughout his career, including his winnings from “Celebrity Apprentice.” Michaels is also personally donating $10,000 this Christmas to Vanderbilt pitcher Tyler Brown’s family for assistance with his daughter’s Down syndrome and health conditions. He is additionally refurbishing the room and hospitality suite that he built for patients and their families at St. Joseph’s Barrow Neurological Institute in Phoenix. His philanthropy has helped not only diabetes education and research but also a diverse range of causes such as childhood cancer, Veterans organizations, PetSmart Charities, Operation Homefront, Feelgood Foundation and many more.

Michaels’ latest hit single and video, “Unbroken” is dedicated to the idea of overcoming any challenge that life puts in front of you. He co-wrote and recorded the song with his youngest daughter, Jorja Bleu, who currently attends a music and arts school. His eldest daughter, Raine, is an in-demand model after being a finalist in the Sports Illustrated Swimsuit Search earlier this year. Michaels himself is one of the most sought-after performers in the world, keeping him on the road for each of the last 10 years for nearly 300 live performances, speaking engagements, charitable concerts and private engagements yearly.

About Hollywood Christmas Parade:
The landmark anniversary celebration will take place on Hollywood Boulevard in Hollywood, California, on Sunday, December 1, 2019, at 5:00 p.m. PT.  The host of Access Hollywood, Mario Lopez, and the Lopez family, are this year’s Grand Marshals. They will join an eclectic array of musical performances featured during the parade and national telecast, including Jesse & Joy, Dionne Warwick, Brandon Jenner, Sheléa, The Band Of Merrymakers, Rock of Ages, Shawn Wayans presents The Boo Crew, Phil Vassar, David Archuleta, Ace Young & Diana DeGarmo, James Maslow, Ashen Moon with Mikalah Gordon and Brandon Rogers. The parade will also feature a special tribute for Toys for Tots and a magic performance by Mai Wynn and Farrell Dillon of The CW hit series, “Masters of Illusion.”

The 88th Annual Hollywood Christmas Parade will be hosted by Erik Estrada, Laura McKenzie, Dean Cain and Montel Williams, with special co-host Elizabeth Stanton. It will premiere as a two-hour special on The CW Network on Friday, December 13 at 8:00 p.m. ET / PT. The parade, featuring Marine Toys for Tots program, which is essential in providing gifts to less fortunate children everywhere, will also air on the Hallmark Channel shortly after as well as on American Forces Network, to more than one million American servicemen and women worldwide. The event will be presented and produced by Associated Television International, in association with The City of Los Angeles.

For information on how to purchase Grandstand Seats to the parade, please visit www.thehollywoodchristmasparade.org